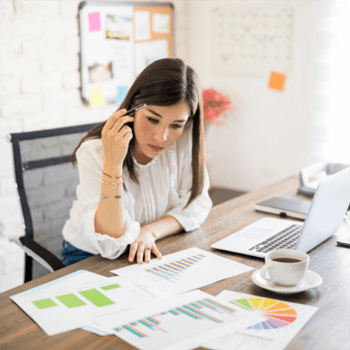 The company website announcement, an abridged version that appeared in the local weekly business journal, congratulated Brandy on her promotion to Accounting Supervisor. Many who saw either of those press releases likely thought it was just good company policy to trumpet a new arrival to management when a promotion occurred within. Upon finishing the journal promotion announcement, the Abel Personnel recruiter, who had placed Brandy several years ago, was in immediate contact with the current HR director.

“Brandy’s promotion was well-deserved,” the HR Manager confided. “Perhaps a few months past due. I am so proud of her, for working her way up from a temporary CSR worker to this position. I am also very pleased with my company, willing to see her skills and talents and mentor and reward her every step of her journey. Please tell all the applicants considering interviewing with us through Abel Personnel that we are the type of company that promotes from within, no matter at what level a person started! Not every temporary CSR will have a career path to Accounting Supervisor, but I think Brandy’s story speaks volumes about our company culture!”

For those who know Brandy, her odyssey to this well-earned recognition was amazing. Brandy had been a recent community college dropout when she arrived at Abel Personnel 5 minutes late for her initial interview. Her dress was hardly professional, and she quickly admitted that the only reason she was there was that her mother had decided to charge her rent now that she was no longer enrolled. The recruiter could see from Brandy’s resume that she had a positive academic and extracurricular record in high school. Brandy had earned some academics-based scholarships, too. That and more in-depth questions over the next 40 minutes convinced the recruiter that Brandy had the intelligence, if not the drive right now. There was a temporary part-time call center customer service representative (CSR) position available at a third-party medical services company that appeared to be a good fit for Brandy. She would be part of a group of 12 people from Abel’s other staffing firms that would report there for training next Monday morning. The group was likely to reduce to eight by the end of the week, some due to not quickly acquiring the phone skills and learning the computer systems; others would fail to show up each day, and some not even reporting on Monday.

The recruiter had a feeling Brandy would make the first cut. Many years at Abel selecting candidates for immediate temporary work had given this recruiter a unique ability to identify non-traditional candidates that would succeed in certain positions. It was rare that any of Abel’s candidates did not make it past the first week. Brandy continued that recruiter’s great record, being at the top of the trainee list, and offered a small bump in hourly rate to continue past that first week.

The assignment was for four months during that company’s healthcare re-enrollment period. As that interval was about to end, the recruiter checked in with the client’s HR director to inquire if any of Abel’s placements planned to extend an extra month, an occasional occurrence. The HR director indicated they would like to move Brandy from a temporary to a direct hire position.

Their agreement with Abel specified a reduced buyout fee for temp-to-perm, which the company was happy to pay if Brandy was also willing to continue. Brandy was thrilled, she told the recruiter, even before she heard about the associated increase in pay and the eligibility for healthcare and other benefits. “I can finally move to my own place!” was the most memorable reaction.

Over the next few months, the recruiter often asked after Brandy with the HR director when discussing other openings to be filled. The reports were always glowing. The recruiter knew this firm would continue to challenge and advance Brandy to retain her and reap the benefits of all she had to offer. Several months later, the recruiter had a call from a potential candidate who prefaced his self-introduction with, “Brandy recommended I be in touch with you.” This offered the recruiter an opportunity to seek an update on Brandy. The candidate reported that Brandy had recently re-enrolled at the community college seeking a certificate in accounting. She did so with her company’s full encouragement, using their continuing education subsidy benefit. A BA in accounting was planned for next.

As the years passed, the recruiter would check with the HR director on Brandy’s progress. The most frequent descriptions they employed were “dedicated” and “disciplined.” After her phone call with the HR manager, the recruiter reflected that Brandy’s story also said a lot about Abel Personnel and this recruiter’s ability to reveal each applicant’s potential to grow their capacity and that of the companies to which they are presented.