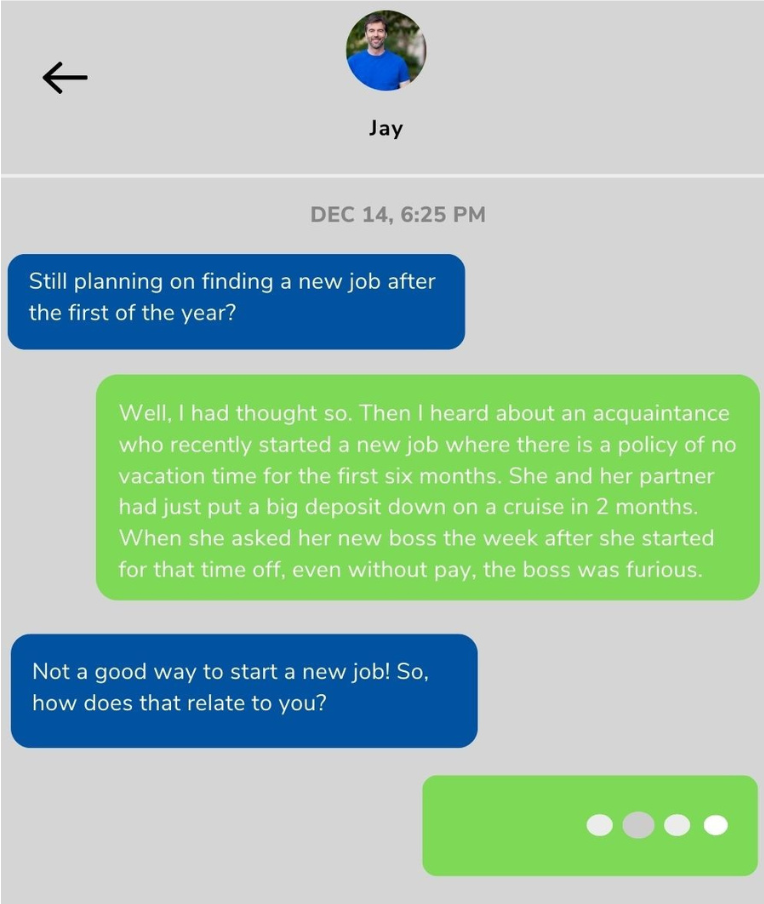 Jay asked, “you’re worried that if you tell your supervisor after you start the new job, you’ll probably get the same reaction as your acquaintance did?”

“I hadn’t thought about it,” Steve replied, “but I have a few long weekends scheduled. There is my usual spring fishing trip with my old frat brothers and a destination wedding where I’m a groomsman. I have plenty of vacation time to cover this at my current job, and I already have my supervisor’s approval for most of these absences. I’d like to move on from this job, but can I do that and keep these plans? And if I tell an interviewer about this, I’ll sound like someone who always seems absent and not just a guy with a good work-life balance.”

Jay considered Steve’s concerns. He responded, “the recruiter I used at Abel Personnel called this ‘undersharing’. Like the opposite of oversharing, when you say too much about your outside-of-work life or your past experiences that aren’t relevant to your qualifications or how you would uniquely contribute to the agency’s success.”

Steve responded, “maybe if I present these in a way that makes me appear to be an interesting person that is well-rounded and perhaps even fun to work with, that might be a positive thing.”

“But what if there are things I feel uncomfortable discussing or may make the interviewer feel awkward, like medical stuff, or worried that I might trigger an EEOC concern?” Steve worried.

“Ah, that’s where having a savvy recruiter comes in to help you. They can guide you on what you should probably not share, what you should share as part of the interview process, and what the recruiter can share before the offer is made to avoid any discomfort between you and the recruiter. That way, if there are any deal breakers, we can address them long before any hiring commitments are made. The recruiter can also work out how you can keep those planned days off, even if it’s an advance on future allowed days off. I think most bosses of new hires dislike surprises about previously planned vacations or medical procedures. Rather than requiring perfect attendance in the first six months of work!” Jay encouraged.

Steve was impressed with Jay’s response and found Abel Personnel’s website on Google.